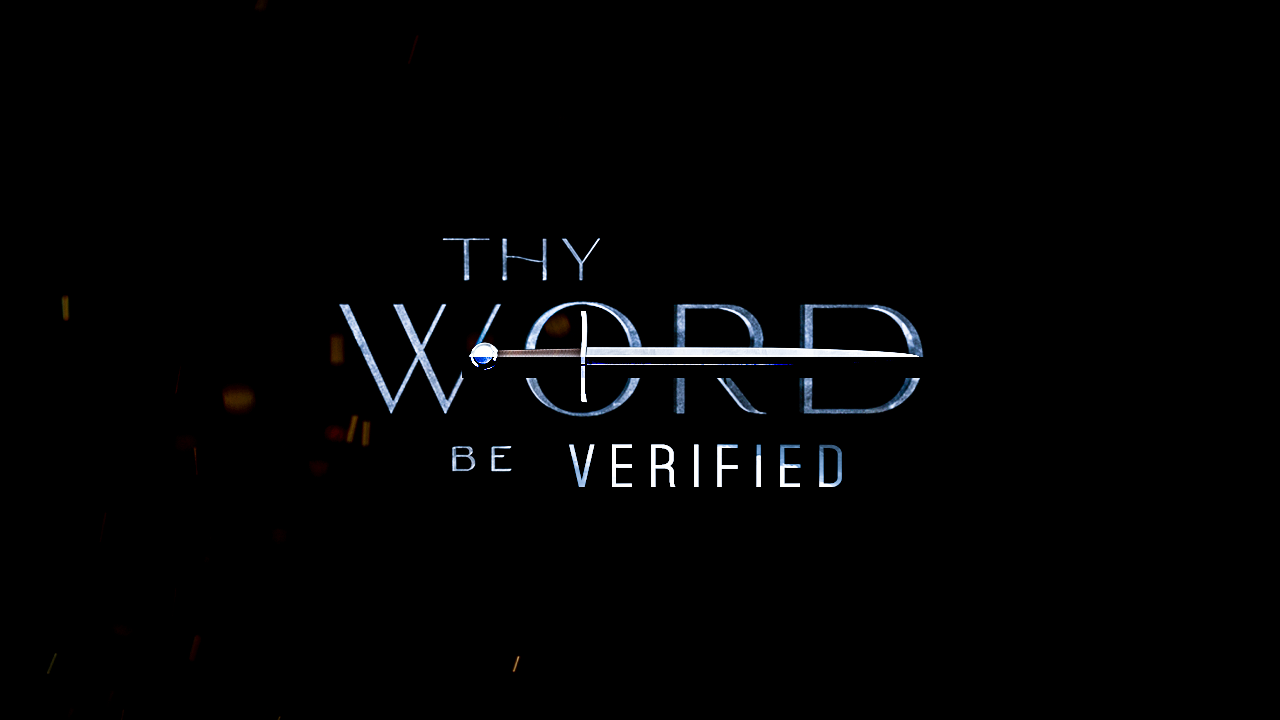 Thy Word Be Verified

Total word counts of the Bible / N.T…. include all superscriptions and colophons.

Who am I? (Brandon Peterson)

A loving father, husband and piece of mud that was born again by the grace of God through His Son Jesus Christ. I believe wholeheartedly in God the Father, the Word, and the Holy Ghost and that all of His words + works are absolutely perfect and in truth.

I believe God gave us His perfect word through the King James Bible, and I pray this video encourages brothers and sisters, so that they can also marvel and read God’s word without questioning if it’s supposed to be there or not. The perfect word of God can be held in our very hands every time we pick up a King James Bible.

Sometimes we fall short and doubt God’s word. Of all, I am certainly inexcusable before God to have any doubt whatsoever in Him, after all that He as shown me. Lord, help my unbelief. I pray you’ll be blessed by an increase in faith and devotion towards God’s will as He reveals Himself to you. He is perfect. His word is truth. And there is NOTHING FROWARD OR PERVERSE in the book of the LORD.

What about modern Bibles?

I lovingly reject the notion of all scholars, preachers, friends, family members and any person who preaches the man-made doctrine that God is unable to give us His perfect word.

Many devoted hours were spent on this topic in great detail, see previous video THE WORDS OF GOD: KJB or Modern Bibles?

At the end of the day, you can believe whatever you want to believe. I believe God’s word, which says the word of our God will stand for ever.

Important note: I never recommend placing emphasis on numbers above the text itself.

During the course of this video, several miraculous signs occurred that I will never forget. Here are the ones that stand out the most:

It was on this day I discovered the 26 / 62 phenomenon in pi which first shows up in the video at timestamp: 26:52. I was blown away by the findings, but also had some lingering doubts over how important it would be to add it to the video. Also keep in mind, I had not yet found most of things that I found since publishing the video. My in-laws wanted pizza. So as we went to pick up the pizza at Pascalis our favorite pizza place, I was trying to explain to my wife about what I had found in pi (not even consciously thinking about the fact that we are going to pick up pizza-pie). My wife was very confused– it’s not easy to explain without physically looking at the digits. But anyways… when I went inside to pay and pickup the pizza, I had a weird feeling that something was going to happen. Hard to explain. Then I paid and they handed me the pizza… and this is what was on the boxes (which I sent right away to Randall who was helping me researching and confirm all of the findings in this video) 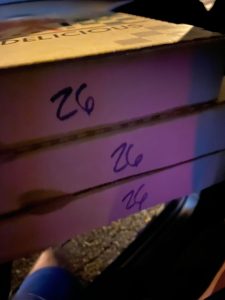 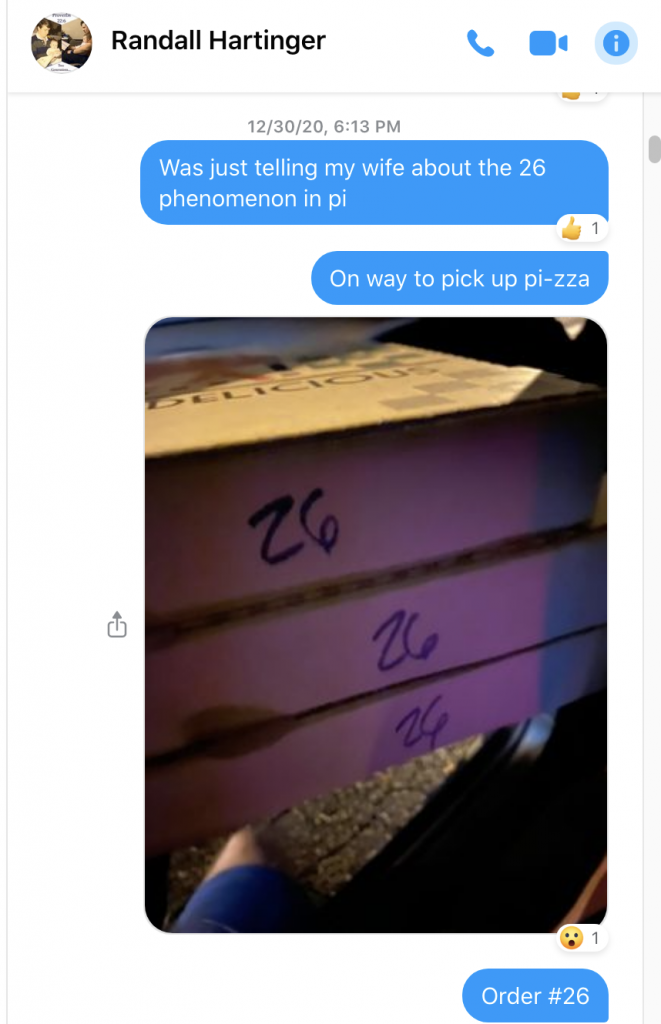 When that occurred, I fully believed God was reassuring me, letting me know I was on the right path.

Late at night, God answered a prayer. I was starting to feel a little sad in my soul that all of these patterns were occurring between 26 / 62 / 37 / 73 / 66 etc… yet I had nothing to show for it in the text of the Bible itself. For example, God loves to deal with sevens… you see it all throughout the Bible. Three’s, Forties, Twelves… sure. But 37 and and 26? Nearly unheard of. This is how I was starting to feel like: I have something incredible to show, but little substance behind it. After I prayed and asked God to help me and lead me… well if you’ve seen the video you know what happens. See timestamp: 57:57. Here is a picture of the paragraph KJB Bible that I use, along with the post I made after the Lord showed me this. 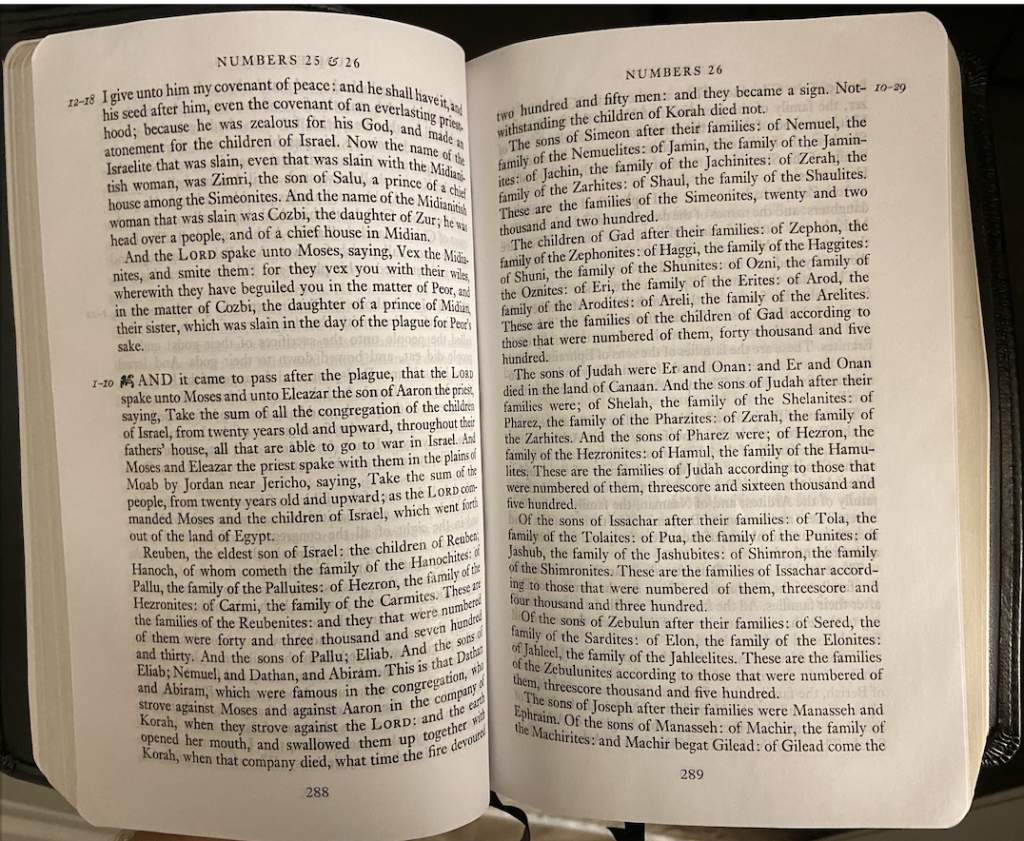 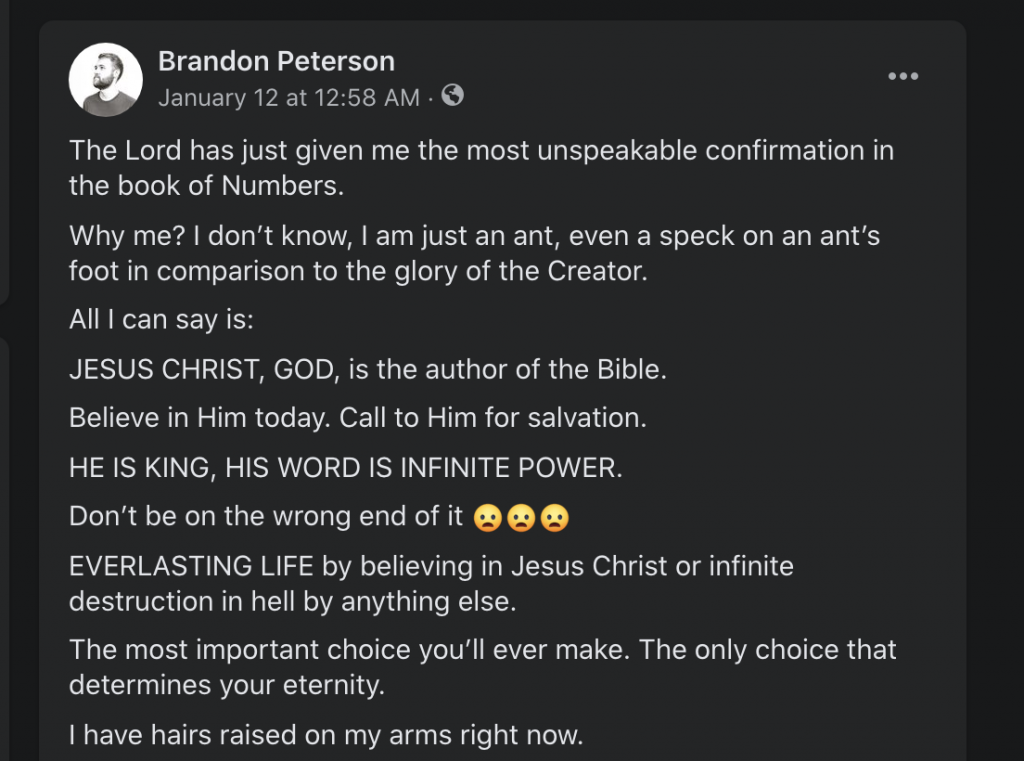 This was in my opinion, the biggest find of all. The 119th verse mentioning “book” occurring on Isaiah 34:16 (the 713th chapter) at timestamp: 1:03:03. I was very excited about it, and told Randall that I found something huge. But then I never told him what it was. So a few days later he asked me, at 10:19am to share. And the wildest thing ever happened. After I shared it with him, he sent me a picture of the parking area in front of the house that he was cleaning. 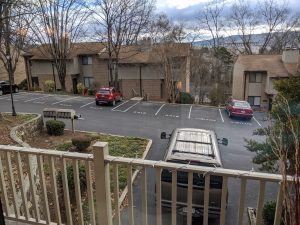 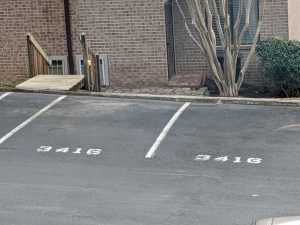 Literally… the digits of Isaiah 34:16 !!! There is a 1/9000 chance that an exact 4 digit number will show up. Furthermore, Randall said that he saw a personalized license plate on the way to the cleaning place with “ISAIAH” on it. 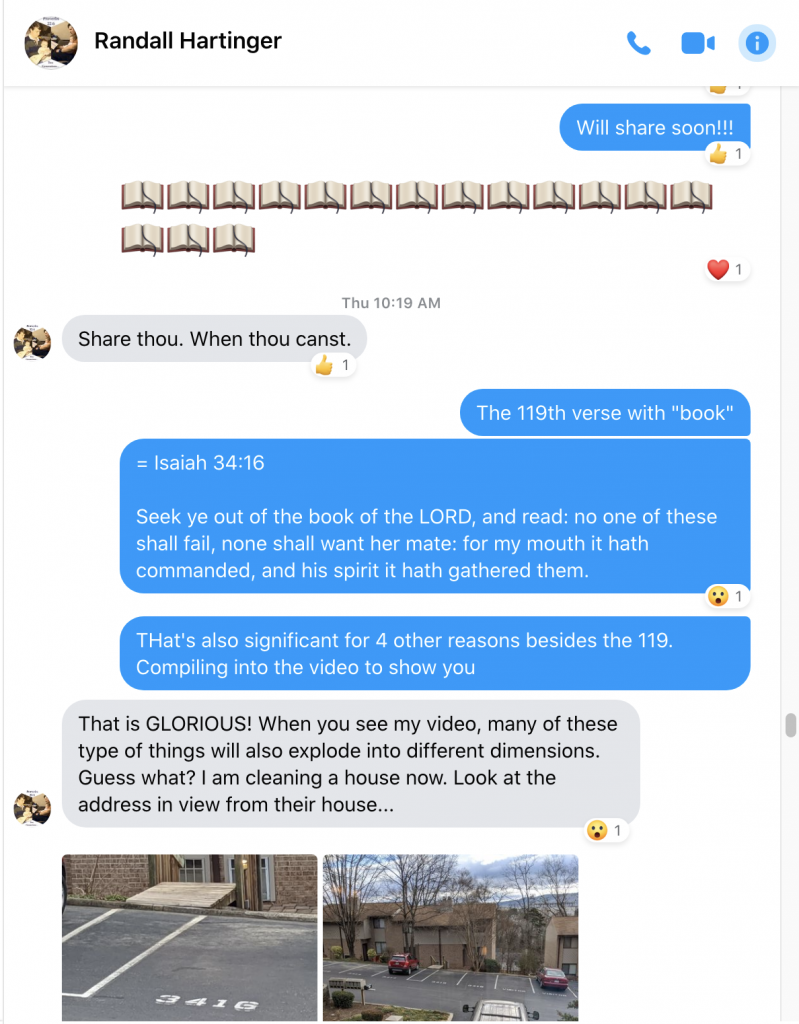 And then, on the way back from cleaning the house, his daughter found a note/reminder in her Bible which said this… 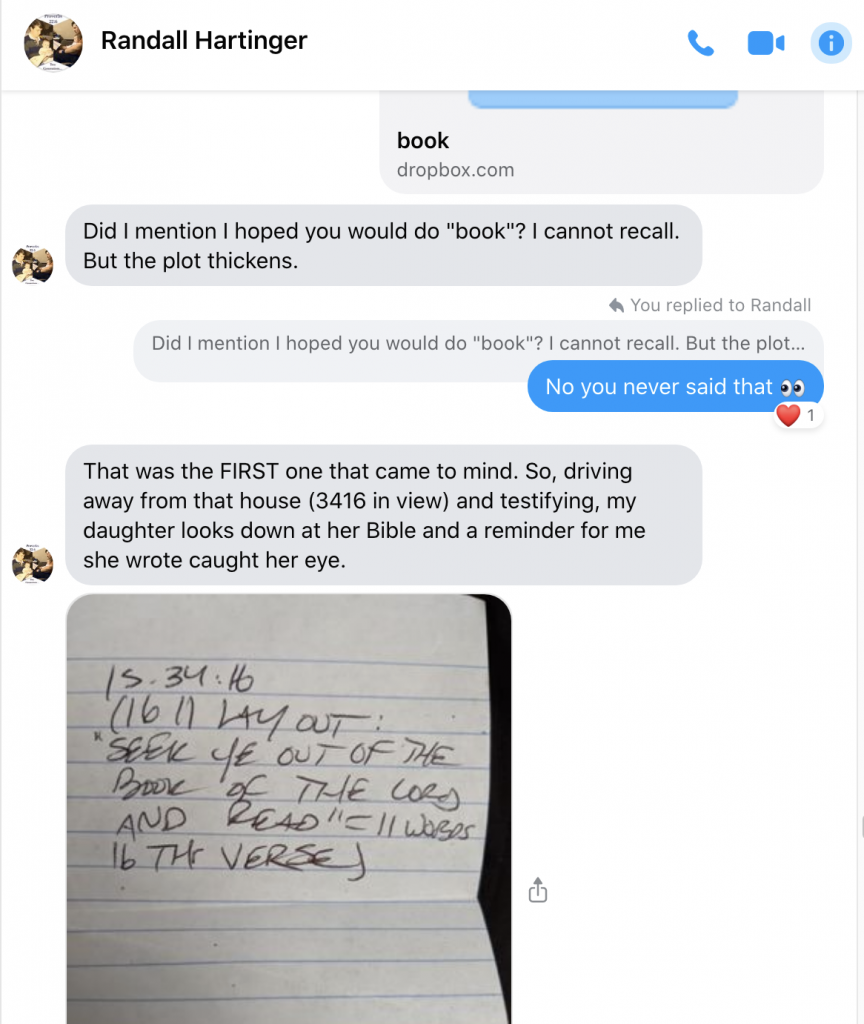 Night before publishing the video. The most prominent confirmation for me happened the night of completion. This was the weirdest confirmation for me because something extraordinary happened. To give you a little background on my laptop: it’s a 2019 Macbook Pro and it’s only around a year old. 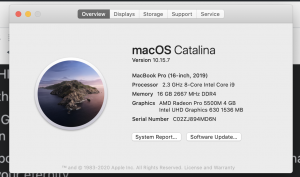 This is the computer I used to edit the video. I was literally about to save the final file for the video to be uploaded to YouTube. I was LITERALLY clicking the File > Share menu in Final Cut Pro. And then I noticed my laptop was at 3% battery life. I thought to myself… how is that possible. It had been connected to a charger for at least 30 minutes to an hour. I double checked. And it was connected perfectly fine. It even had the little lightning bolt on the battery icon – indicating it was actively charging. But the battery kept draining until it died…. while connected to the charger to the wall. So I thought to myself… okay then, I guess the outlet must be broken. So I switched it to a different outlet. It said it was charging. And I thought it was good to go. So I tried turning it on after 10 minutes of charging… and it’s STILL DEAD (normally it would be on again in 30 seconds). At this point I am in prayer, thoughts racing. Asking God what’s going on. Asking Him if it’s not His will to have this video published. Asking Him if there’s something I need to add. Asking Him if there is anything offensive to Him in the video, or if it’s just His way of timing it perfectly… So that was that… my laptop remained dead. This NEVER HAPPENED before (nor has it happened since). So I went to grab my Bible and started reading. After I read for about 10 mins, I checked again. Now it turned on. When I first opened the laptop. I didn’t know what exactly to do. But within 10 minutes I was in the King James Pure Bible Search program, and I was in the 373rd chapter – 2 Chronicles 6. Not even sure how I got there. But I realized something…. the Bible word count in 2 Chronicles was in the 314K range… and 3.14 = Pi… So I went to the pi digits, and looked for the first 6 numbers… 3.14159. then went back to Pure Bible Search and looked for it… unsure of what I would find. That’s when God showed me the 314159th and 314160th words of the Bible. See timestamp: 1:04:44. He literally didn’t let me upload the video without making sure that was included. He killed my laptop with full charger connection. What caused this at that exact moment? NOBODY BUT THE LORD ALMIGHTY. Thank you LORD!

The video has been out now for over a day. It officially premiered at 5:15pm EST on January 23. What happened this morning was truly a sign from God, and I don’t think any level headed Christian could deny it. I do not at all say that to boast, I just don’t see how anyone could see this as a coincidence. Here’s what happened. Randall was looking for my video on YouTube. He looked up my name (Brandon Peterson) and was looking for my channel. Within that search, a video popped up that he watched. Well, I suppose it’s best for you to see it yourself… 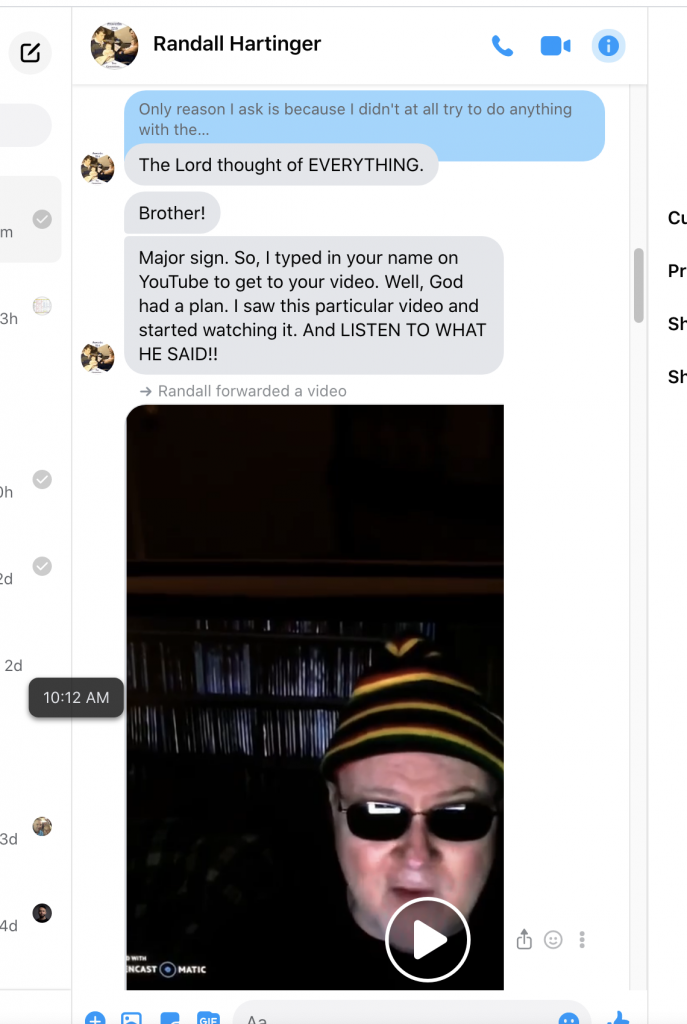 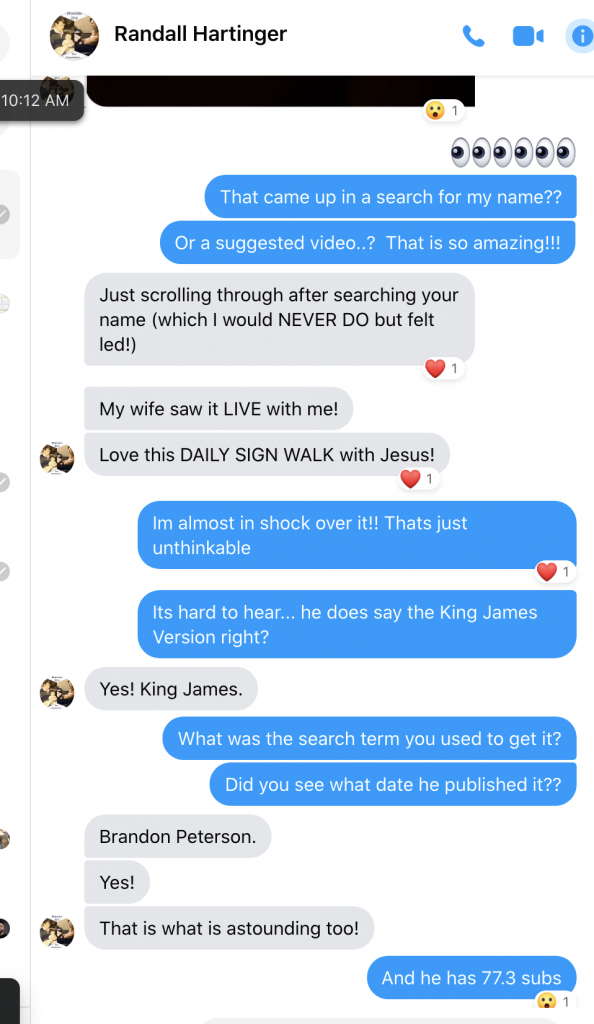 So before you watch this video… just a few notes: I have never in my life ever heard of this guy, nor do I know what he teaches. But here is what he said:

Why would he say that? And why did he show up in Randall’s search for my own video?

So naturally, I went looking for this video, and found it, and could not believe my eyes. 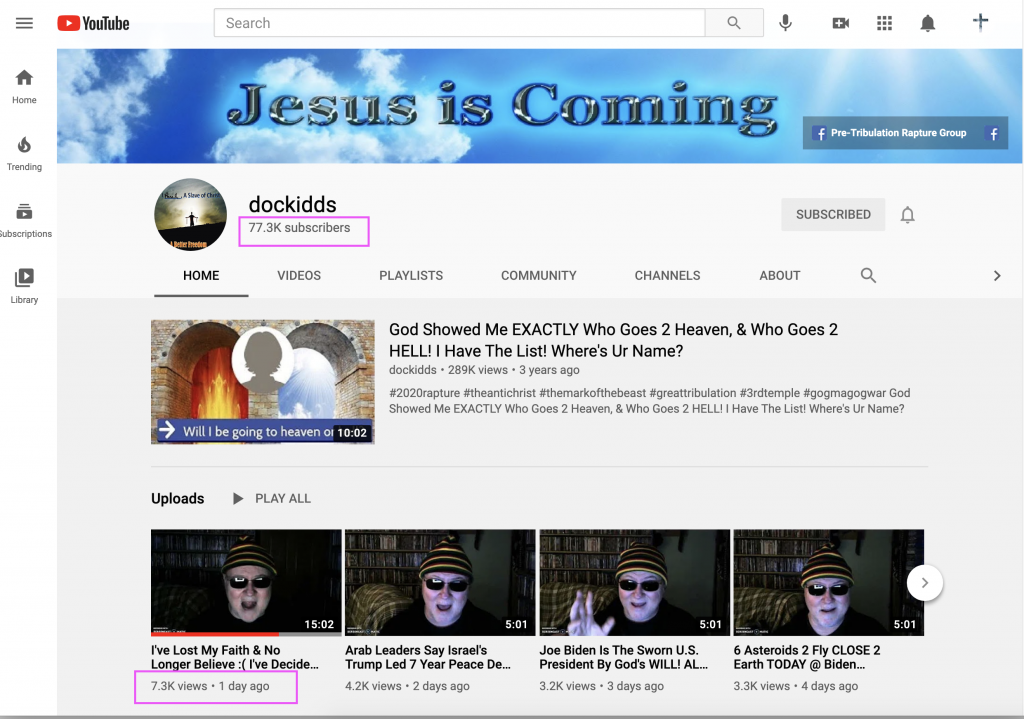 Here is the YouTube link so you can see yourself, this is exactly what he says and when it was published. He says it as precisely 707 seconds into the video.

All glory to the LAMB!!!

I’ve been debating on whether or not I should add this here or not. Even thinking about it now is giving me the chills. Please understand if you’re reading this as an unsaved man, how frightening it is to serve the LIVING God. How much more to be His enemy? (Romans 5:9-10) He died for you. In your place. His blood for your sins. Receive Him if you haven’t, friend. It’s a light thing for Him to do these kinds of things. But for me, it surpasses all my wisdom and understanding. If you haven’t yet read what occurred on January 22, (when my laptop died as it was charging), I encourage you to read over that again.

To me, it was a clear sign that the Lord was watching over the video. But to others who are slow to believe signs (and rightfully so, PROVE ALL THINGS), it may easily be discarded as a “coincidence.”

This is the most shocking of them all.

Because my laptop died before exporting the final video, the Lord led me to find the “pi” word of the Bible. Which I added into the video.

As soon as I added it to the video and made all the necessary audio adjustments, I exported it right away without a second thought.

What I didn’t realize at the time, nor until after the video was already uploaded… is that by adding that extra clip about the “pi” word, I added about 30 seconds of length to the video.

In fact, I even have the original video without the “pi” word discovery which I had shown to a few people that day so they could pre-screen it for errors/mistakes. Notice the date of the unlisted pre-screen version of the video: January 22, 2021. 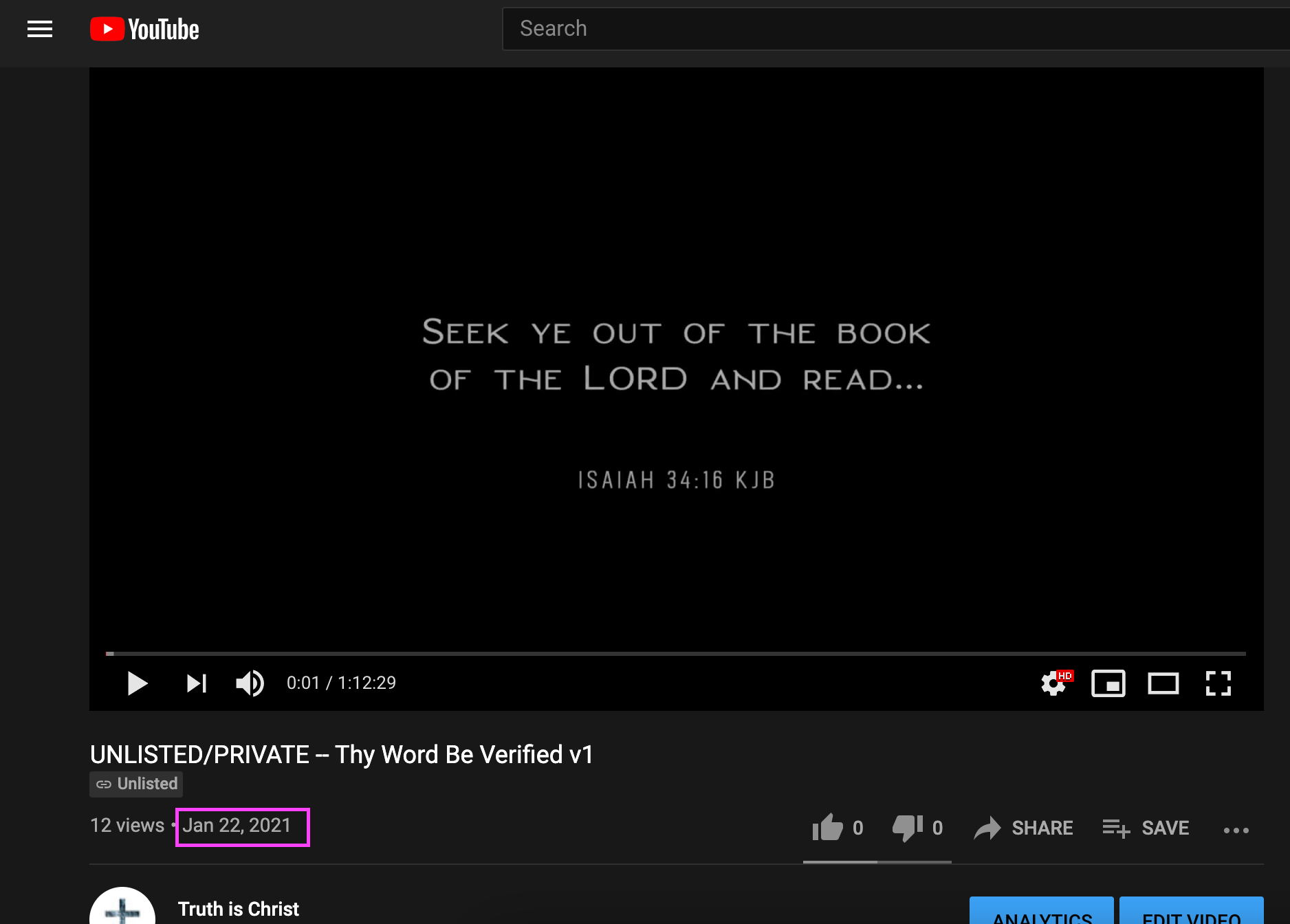 You can clearly see that it’s ~30 seconds shorter than the final video with a total length of 1:12:29

The final version has a length of 1:13:00 as seen on the computer. (On Mobile, it adds an extra second) 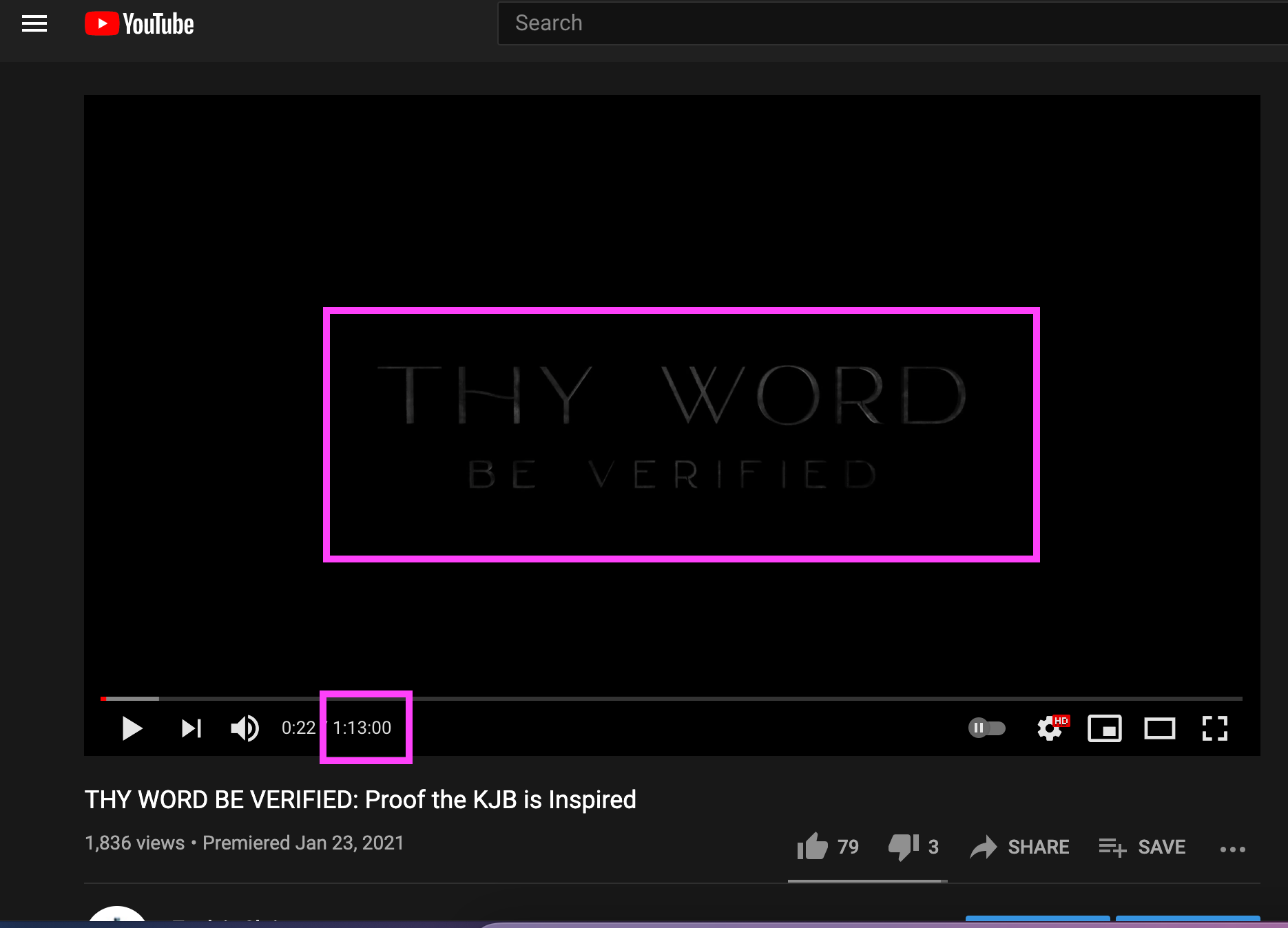 As you can see from both videos, I always had planned for the title to be “THY WORD BE VERIFIED”

This is a title that always stood out to me since I realized it was in the 373rd chapter.

If the Lord did not drain my laptop battery, I would never have discovered the “pi” word and the length would have remained at 1:12:29.

But, because the Lord did not allow me to export the video, He led me to discover and add the final piece to the video, which made it 1:13:00 without me even realizing it. I was just rushing to publish it out of excitement.

Let me just say that when I realized what had happened, I was saying out loud: “Oh no… Ohhh noo…. What have you done?” (talking to God)

…the only verse in the Bible that contains that exact phrase.